Concordia Historical Institute > For All the Saints 2022: Week 4 The Many Faces of Martin Luther

How many portraits of Martin Luther have you seen? Probably a good many. In fact, Martin Luther is likely one of the most iconic faces in portraiture. Luther’s visage graces many a painted, engraved, etched, sketched, sculpted, and printed artworks, across all conceivable styles, genres, and intended audiences. Why is this the case? And what can we learn from this plethora of Luther portraiture?

Artists like Lucas Cranach created an unprecedented amount of representative artwork of Luther during his lifetime. Dozens of likeness of Luther adorned the walls and pages of budding Evangelicals across Europe. There were several key, iconic images of Luther made during his life that served to inspire and inform innumerable other works.

Lucas Cranach’s and other contemporary portraits of Luther plot the life of the reformer: they show him as a young renegade monk, as a newlywed, as a father, as an aging and ill church leader. They all depict him as a reformer. Luther is frequently depicted in non-literal, or even non-representative, settings. Reformation artists frequently portrayed Luther in ways that may seem unusual or distracting to postmodern audiences. For example, there are richly symbolic paintings of Luther simultaneously present in Wittenberg and at the crucifixion. Further, there are many portraits of Luther seemingly floating in a field of flat blue or green with text hung in “spaceless space.” Double portrait of Luther with his wife, Katharina. Here too the pair are shown in a stark, visually blank background.

Perhaps this seems a bit anachronistically surreal to us. What were these artists trying to achieve? Luther’s portraitists sought to communicate his significance. By putting Luther in a visual vacuum, all the focus is on him and the text, usually Scripture. Additionally, the recent boom in print because of the moveable type printing press made textual elements more interesting than ever. Luther’s reliance on text, then, even appears in his portraits. So, when you are looking at a Reformation-era painting of Luther, ask yourself: what symbols is the artist using to teach me about Luther? 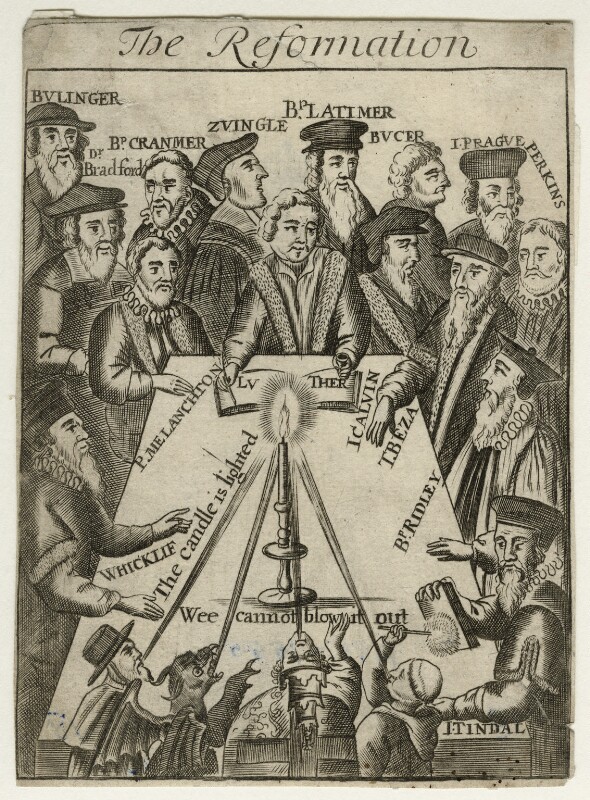 “The Candle is Lighted, We Cannot Blow Out” depicts Luther with a large group of other Protestant reformers and theologians—most of whom are not Lutheran—withstanding onslaught from a group of Roman Catholics and a demon.

After Luther’s death, artwork depicting the reformer took on a new tone. Artists now chose different parts of the reformer’s legacy to highlight—or crafted their own legacy for Luther. For example, many Protestant—but non-Lutheran—artists depicted Luther as chief among the Protestants. Pietists produced artwork of Luther as a pietist–looking into heaven and in the midst of a deeply emotional religious experience. Even the Roman Catholics had a way of interpreting Luther—as an unrepentant heretic in hell!

Why did non-Lutherans want to depict Luther within the framework of their own doctrinal beliefs? Luther was respected within broader Protestant Christendom, and so his presence was like a stamp of approval from the chief representative of Protestantism. Of course, many of these artworks may be seen as misappropriations. For example, in the seventeenth-century engraving at left, Luther is presented as sitting at the head of a large group of other protestants. Most of his tablemates, however, would have been dire antagonists of the great reformer. Theodore Beza, for example, second from Luther on the right, wrote decisively against the Lutheran understanding of the real presence in the Sacrament. Ulrich Zwingli, behind Luther to the left, even fought with Luther during his lifetime! And yet, they are all harmonized in this imagined past in an attempt to provide legitimacy through Luther as symbolic leader, even if Luther the man would never have approved. A romantic-style iron bust of Luther in our Reformation portraits exhibit.

The past century has seen a different kind of Luther portraiture. In these portraits, artists try to highlight Luther’s significance as a cultural figure. This began in the eighteenth and nineteenth centuries with depictions of “Luther the German.” These early, Romantic Era works show Luther as a poetic Volksheld (folk hero), like the main character in a work by Goethe, or as a windswept artist, reminiscent of the famous portrait of Beethoven.

This pattern continued into the twentieth century. The period before and during the First World War saw a surge in German national pride coinciding with the jingoist movement. During the interwar period, Luther remained a figure of pride for a nation utterly flattened by war and economic hardship. Unfortunately, Luther also became a common figure in nationalist and Nazi artwork. However, this was because they associated Luther more with German identity than with the Christian faith. Luther, surely, would not have approved of this use, either. The most recent work in our exhibit. Daniel Harmelink, CHI Executive Director and artist, intended this piece to show how iconic the visage of Luther has become: even in this highly deconstructed depiction, Luther remains recognizable.

After World War II, Luther has continued to be a powerful symbol of freedom, especially religious freedom. Lutheran churches played a large role in the various resistance movements that launched against the Soviet Union in East Germany and beyond, and so Luther sometimes appears in post-Soviet Central and Eastern European art. However, much contemporary portraiture of Luther is more about his secular and historical significance rather than his faith.

The Future of Luther Portraits?

What will future portraits of Luther look like? What kinds of lessons will the artists and designers of today and tomorrow have for us?

Concordia Historical Institute continues to collect artworks of significance to American Lutheranism, and we hope that by including these new works in our public exhibits, our members can learn both about contemporary art and artists as well as learn about Luther through these artworks. We also hope that it will inspire and encourage future artists to use the arts to witness to their historic faith. “Thanks to the support of donors like you, I am able to share in the effort of moving Lutheran history forward by honoring the past and inspiring the future. I value sharing connections and stories of the past with individuals who are passionate about preserving history and sharing the love of Christ across generations. Through my interactions with supporters, I can share the significance of how we can partner together in our mission and ministry.”

A huge part of CHI’s mission to to educate the public—especially the Lutheran public—about the history of our church. By learning about the saints who have gone before us, we can better understand, appreciate, and give thanks for the faithfulness of God and His love shown to us through means, including the means of history. Our two in-person museum exhibits do a fantastic job at teaching about our faith. However, for those people who are unable to visit our Saint Louis museum locations, we also offer a number of online exhibits on a variety of topics.

Presidents of the Missouri Synod: Past & Present One of the most popular exhibits on our website is our exhibit on the presidents of the LCMS from C. F. W. Walther to today. Each entry includes biographical information and links to other pertinent CHI resources where applicable. It’s a great resource and stepping-stone whether you are a casual history buff or working on a scholarly project pertaining to the LCMS.

CHI also offers an online exhibit on Jan Hus. Hus is considered a “proto-reformer,” as the fifteenth-century theologian pushed for reform within the Roman Catholic Church a hundred years before Martin Luther. This exhibit honors his life by exploring his life and legacy, as well as the twelve commemorative Jan Hus medals in the CHI Reformation Coin and Medal Collection.

A Sword Will Pierce Your Own Soul Too

Within the Concordia Historical Institute’s collection are 43 exquisite woodcuts by reformation artist and engraver Albrecht Dürer. Our collection revolves around depictions of the life of Christ and Mary, and the collection is oriented around the prophecy foreshadowing the death of the Son of Mary, spoken to the mother of our Lord: “A sword will pierce your own soul too” (Luke 2:35). The striking graphic art in this exhibit represents one of the most enduring depictions of Jesus in Mary in art history.

Martin Chemnitz at 500: The Second Martin’s Life, Work, and Legacy An illustration of Martin Chemnitz included in the exhibit.

November 9, 2022 was the 500th anniversary of the birth of Martin Chemnitz, known as the “Second Martin” of the Reformation. Martin Chemnitz helped provide stability and uniformity of doctrine in the tumultuous period after the death. This exhibit weaves together Chemnitz’s prolific work as a theologian with his reception and legacy within American Lutheranism.

If you have benefitted from Concordia Historical Institute’s online exhibits, please consider donating today to ensure that we can continue to provide this resource to the world! Your generous donations help us allocate resources and personnel to create these exhibits, a time-intensive endeavour of research, writing, photography, and web design. And to all of our supporters who have already given: thank you for moving Lutheran history forward! We appreciate your enthusiasm and commitment to sharing the Gospel by sharing the stories of our Lutheran forebears in the faith.